Our friend is a volunteer coordinator for Compassion, so she hooked me up a volunteer gig at a Compassion event (The Roadshow). When I arrived I met a couple who were child advocates. They registered me and gave me a volunteer sticker with my name on it. I was assigned to be a packer passer (or aisle runner).

One of the volunteer coordinators gave us a briefing on what to expect and what to do. All of the volunteers then were escorted up to the concourse (where all the other vendors were and the main Compassion booth was). The Packer Passers were given a bright blue Compassion apron with a money bag in the pockets with pens and packets of children that need to be sponsored.

I was assigned two sections where I was to go up and down the aisles holding up packets in hopes that people in the audience would want to sponsor needy children. Unfortunately, I was assigned one of the upper level sections, where there were only a handful of people. A few minutes after we were supposed to be walking up and down the aisles, security closed off the entire top deck due to lack of people there. The Packet Passers in the lower levels had much more success. In fact, 188 children were sponsored that night!

All of the volunteers then turned in their materials and got to sit in empty seats and watch the rest of the artists that were playing/performing that night. I got to watch Third Day and Jamie Grace. Skillet, Andy Mineo, Royal Tailor, We As Human, Soulfire Revolution, Vertical Church Band, and The Neverclaim were also there. 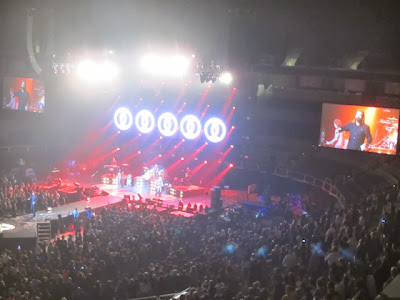 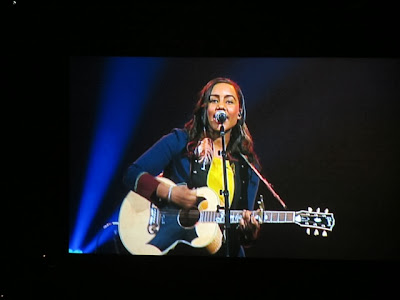 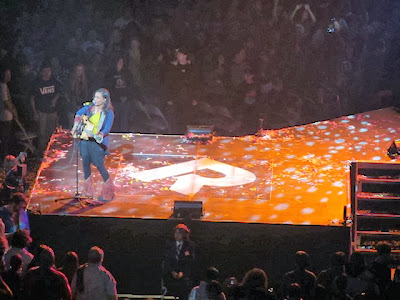 After my volunteer time, I got a chance to FaceTime with my girls (since the arena had WiFi) before their bedtime. I showed them inside the arena and outside on the concourse, including the Jamie Grace booth. 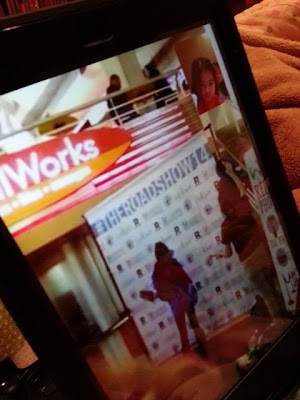 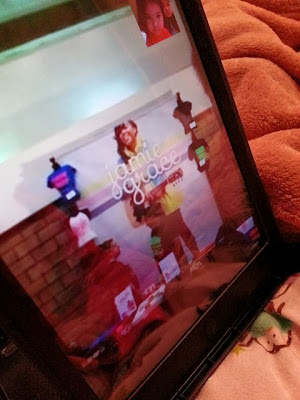 I talked to one of the volunteers who worked Jamie Grace’s booth and she told me that Jamie Grace was going to be signing after the show. I ended up staying late after the show, bought a poster, and Jamie Grace signed it for my girls. Not bad for one night’s (volunteer) work. 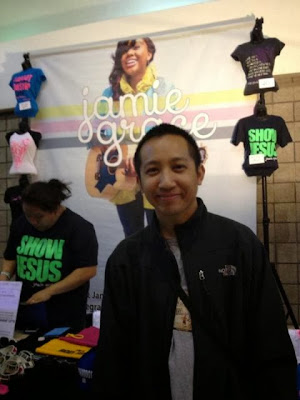 The Roadshow 2014 event made an impact on 188 children! Can we help make an impact on the lives of 400 more children? Let’s do it!! 167 children have been sponsored so far, but there are more waiting. SPONSOR A CHILD TODAY!

Giveaway is now closed. The winner of Grace Unplugged and Own It is Kayla Rice!

“Disclosure of Material Connection: I received the products mentioned below for free in hope that I would mention it on my blog. Regardless, I only recommend products or services I use personally and believe will be good for my readers. I am disclosing this in accordance with the Federal Trade Commission’s 16 CFR, Part 255: “Guides Concerning the Use of Endorsements and Testimonials in Advertising.”

Have I got a treat for you! The winner of this giveaway (details at the bottom of post) gets two books: Grace Unplugged and Own It. If the title Grace Unplugged sounds familiar, it probably is. This book is a novelization of the movie script. (There are performances by Chris Tomlin and Jamie Grace. Starring AJ Michalka (of AJ & Aly) and James Denton.)

Own It: Discover Your Faith in God <– link to our review
Written by Hayley and Michael DiMarco

About Grace Unplugged the Novel
Grace Trey is an 18 year old singer as passionate about her Christian faith as she is her phenomenal, God-given musical talent. Both traits come from her father, one hit wonder Johnny Trey who found Jesus after losing his chart success two decades ago. When Grace encounters her own music break of a lifetime, the sudden dive into the “real world” puts her deeper beliefs to the test. Pop superstardom is just within reach but appears to require some spiritual compromise. Will Grace reject her faith, or will she own it?

About Melody Carlson
Melody Carlson has sold more than five million books. A professional writer for twenty years, she recently received the Romantic Times Career Achievement Award. Melody has two grown sons and lives with her husband in the Pacific Northwest.

Anyone have plans to watch the movie? Anyone local want to go together? The movie releases on Friday, October 4th!! Here’s the trailer:

About Own It, Discover Your Faith in God
Own It mirrors the film by asking what it means to really “own” your personal faith rather than just automatically following in the footsteps of parents, friends, or other influencers. Best-selling authors Hayley and Michael DiMarco help readers understand what to do when faith meets real world challenges. Without solid beliefs, poor choices are likely to follow. You must take the time to really know who you are, who you are becoming, and who God made you to be. It’s your personal faith . . . own it!About Hayley and Michael DiMarco
Hayley DiMarco is the best-selling author of more than thirty books including Dateable, Marriable, Mean Girls, and The Woman of Mystery. She has been a featured speaker at Women of Faith, Precept National Women’s Conference, and MOPS Intl. among others and has consulted on the creation and enhancement of some of the largest stadium events for teens and young women in North America.

Michael DiMarco is a skillled communicator and teacher who has authored more than a dozen bestselling books including the 2010 Christian Book of the Year for Youth, B4UD8 (Before You Date). He and his wife, author Hayley DiMarco, have one daughter and live in Nashville, Tennessee.

There seem to be a theme in the lessons God is teaching me lately. Grace…Grace… Grace…

GIVEAWAY time!!
One lucky reader will receive a copy of Grace Unplugged and a copy of Own It. Giveaway ends Thursday, October 3rd at 2:30pm.

To enter, leave a comment telling about the last book you read, or a worship song that you like, or anything related to faith…or say ‘Howdy!’ Thanks!

For extra entries, you can leave one comment on any post on our blog ONCE A DAY ONLY until the end of the giveaway, or leave a comment on our review of GRACE UNPLUGGED and/or OWN IT.