I recently updated you on how I’m doing with my book list for the year, and you might have noticed that I finished a book called Notes from a Blue Bike by Tsh Oxenreider. (Read my review HERE.)

Tsh is on a book tour, which doesn’t happen too often with authors nowadays since there are usually online book tours. Tsh had a launch party in Texas, and then hit up the East Coast first. She and her family were in Seattle over the weekend, and then drove down to the Bay!

I actually hadn’t decided on whether or not we were going to make the trek across the bridge to the book signing (Bay Area traffic and all the ER craziness of the past week…), but since Norm said he would just take Muni to the location to meet us after work, I got the girls ready and we headed off.

There was surprisingly very little traffic, but it still took us almost an hour to get there because Java Beach Cafe is at the very edge of San Francisco (next to the Pacific Ocean) opposite of where we were. Parking was also surprisingly not bad…it actually was, but I was fortunate to find a tiny spot where my car could fit.

It was already 30 minutes after the start time, but Norm was holding a spot for us at a table, so we quietly slipped in for dinner and strained our ears to hear what Tsh was saying. 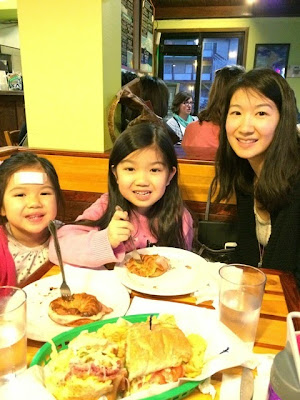 Tsh is a delight. I wish we could have coffee (or tea) again, along with some other mutual (online) friends. That would be super fun. 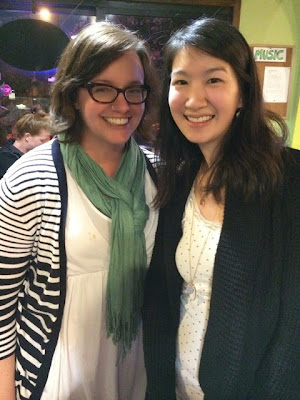 With the family too. 🙂 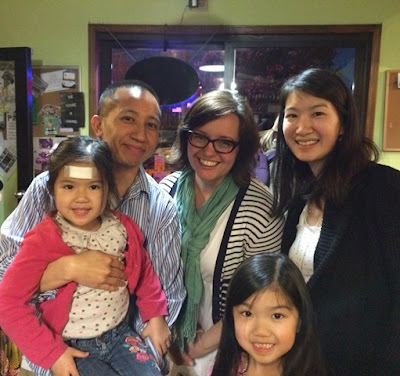 Melody had a few questions she wanted to ask, but she got too shy to ask them. :p 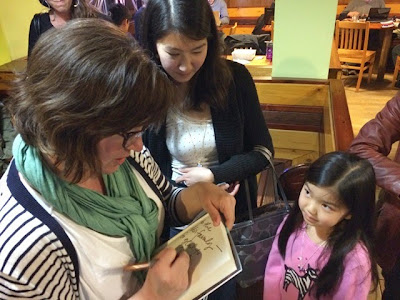 It was already late, and there were still other ladies waiting to get their book signed, so we went on our way, but not without meeting Tsh’s family first. We had a good time chatting with Kyle for a bit. Finn was super cute when he was being introduced, and right away held up 3 fingers to let us know he is three years old. 🙂  As we were leaving, I told Tate to have a fun trip to San Diego, and have a good night, and she said, “You have a good evening too,” because that’s how kids usually respond to “good night”. :p I think she and Melody would get along great. And Reed (I can’t forget the second-born/middle-born since I am one myself), well, how cool is he for being the only one in the family who was not born in the United States (if I remember correctly).

I think the girls enjoyed meeting Ms. Tsh. We started reading Notes from a Blue Bike together the next morning (my second time through so I can marinate in some of the info). When I interrupted the book with a few side notes, the girls told me to not do that, and to keep going. It’s that good. 🙂 It is also fun that some of the places on the map in the book shows places the girls learned about this year. Another thing I like about the book is that the chapters are short. (My other thoughts are on my review of the book HERE.)

This post is part of the Blue Bike Blog Tour, which I’m thrilled to be part of. To learn more and join us, head here.

Why is it so hard to slow down in our fast-paced culture? I think this is a super hard question to answer, especially if you are in the stage of life where you are parenting young ones. Their needs seem never-ending added to the Pinterest-perfect expectations that we think should be attained. There are activities to attend, parties to prepare for, sports teams to join, books to read, baseboards to clean (for real, I haven’t clean mine in years!), and the list goes on.

Enter Tsh’s book Notes from a Blue Bike: The Art of Living Intentionally in a Chaotic World!

As I have been trying to work on My One Word this year, I have been seeing more and more how doing less actually helps me to do more. It’s kinda crazy in some ways, but it’s true. Try it!

I am savoring this book, and in the name of slowing down, I am taking in Tsh’s words, her story, a little at a time, and really focusing on doing life as God has called me to.

Our family is more and more enjoying the moments together on our own bike rides:

I also love what Tsh has to say about education. I’m all kinds of bookworm nerdy, so I love love love learning, and am a life-long learner. I had a great experience in school, and I did learn a lot, but discovering the world through books, through people, through travel, and everything in-between has also been a great teacher for me.

Get your own copy of Notes from a Blue Bike today!! Lots of fun goodies if you buy multiple copies for your very own book club! #notesfromabluebike

Notes From a Blue Bike is written by Tsh Oxenreider, founder and main voice of The Art of Simple. It doesn’t always feel like it, but we DO have the freedom to creatively change the everyday little things in our lives so that our path better aligns with our values and passions. Grab your copy here. Also available on Kindle.

“Disclosure of Material Connection: I received the products mentioned below for free in hope that I would mention it on my blog. Regardless, I only recommend products or services I use personally and believe will be good for my readers. I am disclosing this in accordance with the Federal Trade Commission’s 16 CFR, Part 255: “Guides Concerning the Use of Endorsements and Testimonials in Advertising.”

Sweet sisters! One of Emily’s favorite parts is reading about the illustrator, Breezy Brookshire, because she has a sister named Emily. 🙂

This book came at the perfect time. We were having a women’s retreat at our church, and I got to have some quiet ‘me and God’ time. It was wonderful to reflect and hear Him speak. The passage that we were to read over was Psalm 139, which is part of what this book is about!!

I praise you because I am fearfully and wonderfully made; your works are wonderful, I know that full well. – Psalm 139:14

About Audrey Bunny
From best-selling women’s author Angie Smith (I Will Carry You, Mended) comes this sweet children’s book about a stuffed animal named Audrey Bunny who fears her imperfections make her unworthy of a little girl’s love. She’ll learn the truth soon enough, and young readers will learn that everyone is special and wonderfully made by God.

Angie Smith is the wife of Todd Smith (lead singer of Dove Award winning group Selah), best-selling author of Mended, I Will Carry You, and What Women Fear, and one of the most popular speakers and blog writers in the country. She holds a Master’s degree in Developmental Psychology from Vanderbilt University and lives with her husband and daughters in Nashville, TN.

GIVEAWAY time!!
One lucky reader will receive a copy of Audrey Bunny. Giveaway ends Sunday, October 20th at 11:30pm. (This happens to be my sister’s birthday, so you can wish her a happy birthday for an extra entry. 😉 hehe)

To enter, leave a comment telling about the last book you read, or if you had a favorite stuffed animal when you were a child, or if your kiddo has a favorite stuff animal, or anything related to being wonderfully and fearfully made…or say ‘Howdy!’ Thanks!

For extra entries, you can leave one comment on any post on our blog ONCE A DAY ONLY until the end of the giveaway, or leave a comment on our review of AUDREY BUNNY.

Remember when I told you about Sarah Mae and Sally Clarkson’s new book, Desperate: Hope for the Mom Who Needs to Breathe? If you don’t, here’s a REFRESHER. When you’re done reading that, come back to this post for an announcement.

So…there’s a movement going on. It’s the No More Desperate Mom movement. Are you a desperate mom? Do you know a desperate mom? Well, it’s time we all work together to end it, don’t you agree? No more desperate moms! If you are a mom who has been there, a mom who has already gone through this season of sleepless nights and piles of dirty diapers, and wonder when or if your kid will ever stop throwing themselves on the floor screaming at the store because THEY. NEED. THAT. TOY!, could you encourage a young(er) mom today? This week? Let them know that it’s going to be okay. Let them know that they will one day have more than 2 straight hours of sleep. Let them know they are not alone. Just be there.

The DVD for the book Desperate is coming out MONDAY! In the DVD, there are videos of Sarah Mae and Sally talking about each of the chapters. There is also a bonus section of Q&A with the lovely authors.

Here are some fun stuff for you mamas out there during launch week for the DVD:

**TOMORROW ONLY, the Desperate eBook will be on sale for ONLY $3.99 on AMAZON.

**Monday-Friday of this week, anyone who buys 5 paperbacks (for group study, church, gift to mommy friends, etc.) can get the DVD FOR FREE. If you buy 5 or more books, you can just email a scan or pic of your receipt to desperatebook@thomasnelson.com

**Monday’s giveaway: Sarah Mae and Sally Clarkson will be giving away a $100 gift certificate to a maid service, a Yankee candle (winner’s choice), a “breathe” custom necklace, 5 books, and a DVD. Hello? What desperate mom wouldn’t want to have maid service? (Psst, the breathe necklace is beautiful and has been a great reminder for me to…breathe.)

**Tuesday’s giveaway: Sarah Mae will be giving away a set of the BEAUTIFUL Grace & Gratitude dining collection from Blessings Unlimited.

There might be a few more giveaways in store…I’ll keep you updated. To watch a trailer and get other free resources, check out the http://desperatemom.com.