After we went to Jelly Belly Factory, we stayed overnight with our friends’ house. Then, in the morning, we left for Apple Hill, which was about a hour’s drive away. The mom and older sister had to go to softball practice, so we arrived separately and met at Boa Vista, the second orchard we visited.

Captions by: Melody
Extra comments (in italics) by: Joyce
Photos by: Joyce and Norm

Below is a picture with me and my friend on our drive to one of the five orchards we visited. It was a little blurry because the road was bumpy and we were in the car. She asked to go along with us that time.

Abel’s Apple Acres
Our first stop was Abel’s Apple Acres. (Kind of a tongue twister, right?) They have all sorts of baked goods there. My friend got a caramel apple there and then I had an apple donut. I also had part of an apple fritter too, and we bought apple cider. Then we got a pizza slice. (Because, a “real” lunch was needed. 😉 ) It was REALLY good and also very big so I had to share it. Also, there is a picture below with a bear. Reminder: if anyone ever wants to go there, there are two bears out front – Annie the Apple Bear and Andy the Apple Bear. Take a picture with them. There are bungee cords down the hill, but you have to pay to go on them.

Boa Vista Orchard
Our second orchard at Apple Hill was Boa Vista Orchard. There, you can pick apples, but we didn’t do that because it was very crowded. We also tasted some samples of apples. Fresh apples = good. I ate the Empire apple and the Candy Crisp apple. If you haven’t heard of either of these, the Empire is a little crispy and sweet. The Candy Crisp is very crispy (like it’s name) and sweet. They also have a little shopping area with things that people sell there.

Kids Inc
Just like it’s name, Kids Inc. is completely kid-friendly. They have: Kids arts and crafts, You-Pick pumpkin patch, pumpkins and apples, Corn Maze (all ages), Junior farm tours, and a nature trail. There is a very big hill that leads to the little kid corn maze. Kids were rolling down it. There was one girl and her mom, and they had their pumpkin. But unfortunately, their pumpkin rolled down the very steep hill! They also have vineyards at the end of it, so the pumpkin rolled INTO the vineyards! The dad went to go get it, but I think they should have gotten a new pumpkin instead of going through all of that trouble later.

Rainbow Orchards
After that, we went to Rainbow Orchards. They are famous for their Apple Cider donut. This was our friends’ last stop, so we said goodbye and took the picture below before they left. There are benches that you can sit at there also.There are: Hay Bale Hop-a-Crooked-Mile, “Piper’s Pumpkins” Photo-Op Wagon with Heirloom Squash and Pumpkins, and a Fresh Cider Mill. We didn’t go to these because we didn’t have enough time, but I’m sure they are very good. 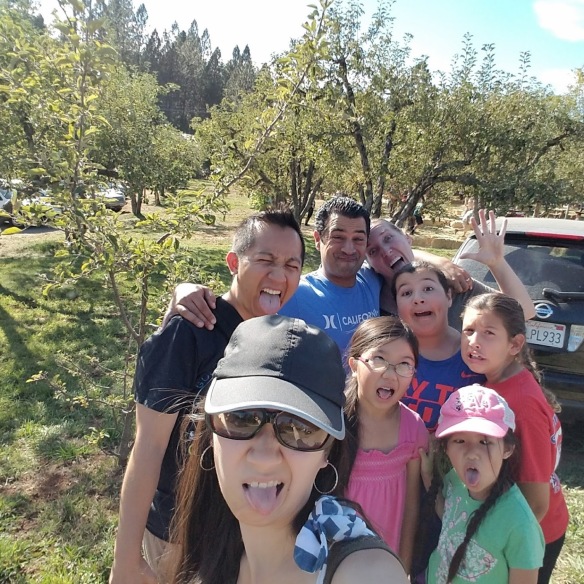 Honey Bear Ranch
Our last stop was Honey Bear Ranch. We went to this one by ourselves, and it was very quiet there, which I liked better than all of the orchards, which were crowded. They have very good apple milkshakes there, but they didn’t have any left, because it was later in the day. There they have a waterwheel, a fish pond, and lawn area games.

Welcome to South Lake Tahoe
We drove to South Lake Tahoe from Apple Hill. This was 1 hour and 15 minutes, but because of traffic, it took us more than 2 hours to get there. We arrived at dinnertime. I had forgotten how much elevation there was there. I couldn’t look down almost the entire time. On our way there we passed Strawberry (population of 50 people) and Twin Bridges (population of 10 people).We stayed at Aston Lakeland Village Resort, which is a townhouse place. We went with my dad’s parents and his brother and his wife. We rented a 3-story place with 4 bedrooms and 1 loft bedroom on the 3rd floor. Then, we made fried rice there for dinner.

Click on the link to view the DAY 2 ALBUM.