If you follow along with Our Week in Photos, you should have seen some photos of the girls putting together their Operation Christmas Child shoeboxes in September. Yes, in September!! This was the earliest we have ever put them together because we save stuff throughout the year, and this year, the box that we keep it all in was bursting!

Norm and I have been taking part in Operation Christmas Child since before we were married. I can’t remember the first ones we made, but I think we were in college, so definitely more than a decade ago.

And can you believe that since its beginnings, Samaritan’s Purse have given out more than 100 million shoeboxes, and did I mention that I know the fantastic mama who helped give out the 100 millionth box? I DID, and I DO!

It’s so simple that kids can even do it! National Collection Week is coming up – November 18-25. Every child who gets a shoebox will be able to hear about how much Jesus loves them.

The shoebox that a child receives is not only a gift of hope, but it is also a gift of good news. CLICK TO TWEET 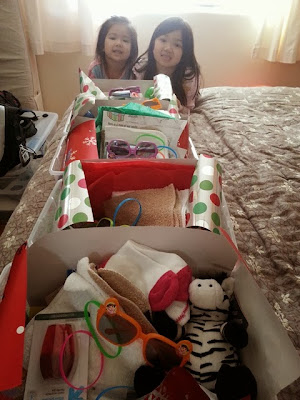 Love Your Neighbor: A Gift of Forgiveness in Rwanda
Alex Nsengimana, a survivor of the Rwandan genocide, has a powerful story to share. “Alex recently returned to Rwanda to deliver shoebox gifts to the same orphanage where he received a gift himself. He also found the man who murdered his uncle who is now in prison. He met the man face-to-face and offered him forgiveness. This is a powerful testimony!” You can read more about ALEX on the Samaritan’s Purse website.

More videos: Sharing God with a Gift | The Peace of Letting Go

Hey! It’s shoebox time, Jack!
Tell me you have heard of Duck Dynasty by now. I saw quite a few Duck Dynasty costumes this Halloween. Samaritan’s Purse is partnering with Si Robertson…or Uncle Si as many know him. The Lord has blessed 100 million children with shoebox gifts over the past 20 years, but there is still a great need to reach more children! Uncle Si will teach you how to pack your very own shoebox to send to a child in need of a small gift this Christmas. You can watch the video HERE as well as some ‘behind the scenes’ videos!

Remember to use or follow the hashtags #occalex and #ShoeboxSi to keep up with the Operation Christmas Child adventures this year.

Here are some great resources and spiritual impact stories to encourage you:

Have you packed a shoebox before? What are some of your favorite items to include?