Okay…so here’s the story of what happened yesterday…

I finished dropping Melody off at church for AOK. Things are going as normal on a Thursday afternoon. On the way back, I was driving by the BART station. This is still normal. It was a green light so I continued through the intersection. There was a girl who was walking with her head down and hair in her face who was walking diagonal…not as normal, but hey, this is the Bay Area. Things happen.

I slowed down and stopped. It was like a scene from one of those zombie movies. Here’s the not normal part. She continued to walk into my car, and the around the side to where the side mirror was. Then she just kind of laid her head down. Like, hey, I’m just going to take a nap on the hood of your car. NOT NORMAL!

People started honking their horns, and I was honking my horn, but she was not fully conscious…I mean, conscious enough to remain standing, but on my car hood. Emily is freaking out in the back. Poor girl. I told her to say a prayer. So she did. “Dear God, help the girl be okay. Help her to get off our car.”

Since Emily was with me, I didn’t want to get out, not knowing what the girl would do. My guess is she is college age?? I’m so bad at guessing ages. I couldn’t guess someone’s age if my life depended on it. I mean if anything did happened, I could have totally taken her down…I do have my yellow belt in taekwondo you know. Anyhow, I didn’t get out.

So I’m still in the middle of the intersection. Spot center. Everyone who saw her walk into my car has gone by, and other cars who are lining up behind me don’t see her so they think I’m just blocking traffic. Emily doesn’t know what to do. “Mommy!” I’m trying not to freak out because that’s what moms do when they’re in the middle of the intersection and there’s a girl on the hood of their car. We don’t freak out!

A lady who saw what happened came around, but not too close, started asking her if she was all right. It looked like a BART employee was calling for backup. In the midst of all of this, I somehow called the sheriff’s department too. So I’m on the phone, and they said someone else called it in too. The lady has no luck getting her off my car. A guy drives up and asks if my car needed a push. I pointed to the girl on my hood! NOT NORMAL! He looked shocked because he didn’t see her at first. Now, the lady and the guy are trying to get her to snap back to reality. “Hey sweetheart, you can’t just lay on this lady’s car. The police are coming.”

She FINALLY gets up, and I’m still on the phone with the dispatcher. She tells me to stay, which I was going to do anyhow because I wanted to make sure that the girl was okay. She looked dazed as a few people help her to cross to the sidewalk. When I finally drive around the other side of the parking lot to get out of traffic’s way, everyone who was originally there was gone. We now have the sheriffs there, the BART police, other official-looking type people. The officer takes my statement, and says there’s nothing else for me to do, so I get ready to leave. The fire department shows up. The girl doesn’t look like she knows where she is, and doesn’t look like she’s talking a whole lot. This, people, is all not a normal part of my day!! 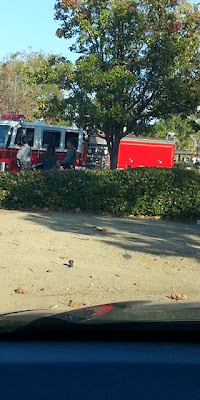 I am from San Francisco where there are lots of interesting things happening every single day, but this is a first for me. So, that’s my story.

Anyone else have an interesting Thursday yesterday? What is the strangest thing that has ever happened to you?

P.S. If this sounds familiar to anyone, like you know the girl in my story, please let me know if she is doing okay. I don’t know if she is maybe taking medication which caused this, or if she has some other issues. She, and others, could have been injured if there were cars driving by and she just stepped off the sidewalk into traffic.