You can begin with the backstory of how we got involved with the Brain Tumor Walk…
In Support Of | My First 5k Walk | Save This Date | Brainy Quiz | Donate Here
Or you can skip ahead to read an update on Andy and about how we are doing in our fundraising for this year.

This Saturday I will be taking part in my 2nd Brain Tumor 5k Walk. Last year I was actually going to go it alone, but some buddies decided to join me. When I posted right after the walk, TEAM ANDY was ranked #41 of 214 team in fundraising $3,853.33. But I think we got more donations before they started up for 2012 and it was over $4,000! Go TEAM ANDY!!! This year, Norm, Melody, and Emily will be joining the team as well! Yay! It will be the 2nd 5k walk that we are doing together as a family.

Andy Update from Andy’s cousin Johnny
Andy’s attitude is still ever optimistic, maybe even more than we saw last year. His sense of peace and hope is still shockingly amazing. And you could tell that it’s truly God’s supernatural strength that’s carrying Andy through such difficult times, giving him such an amazing courage. Andy shared that in the midst of such an incredibly difficult life situation,  there was nowhere he could turn, except to God. He laid everything out before the Lord and trusted that he would take control of the situation. He trusted that if God was so faithful in carrying him through other previous life situations that were much less difficult, how much greater would God work to carry him through the scariest of scariest times. Andy possesses such a child-like confidence & trust – knowing that God is right by his side, protecting him, looking out for his best interests. He went on to add that his experience reminded him of the poem “Footprints in the Sand” where he looked back at the replay of his life and saw that during the good times, there were two sets of footprints – his and God’s. But during the most difficult times in life, there were only one set of footprints. Why would God leave his side during the toughest and scariest times when Andy needed God the most? He was reminded that during those most difficult times, God was in fact carrying him. 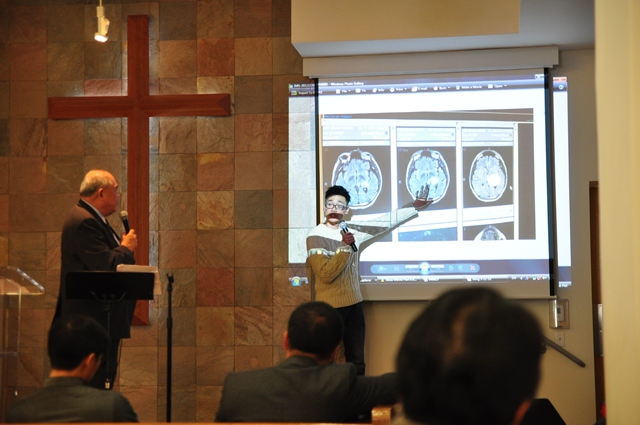 Additional amazing news – in the photo above – Andy’s tumor has shrunken dramatically!! I’d say it’s gotten about 80% smaller at least! Praise the Lord for his incredible healing power! Look at the photos. Andy shared that the original x-ray (on the right side) showed a golfball-sized tumor. The x-ray in the middle showed a dramatic decrease in the size of the tumor already, indicating that the radiation, chemo, and Avastin (intravenous) treatments were working. And the x-ray on the left showed an even smaller sized tumor! Andy shared that his oncologist admitted that the decrease in tumor from x-ray 2 to x-ray 3 was indeed God’s miracle! PTL!

Fundraising and Donations
It is through fundraisers like the Brain Tumor Walk that make it possible for research to be done so that there are treatments to prolong cancer patients’ lives. I just want to say a BIG THANKS for those who are in this with us through prayers and your donations. We have reached our group goal, but some of us are still working toward our personal goal.

Melody’s goal was to raise $110 and she got there with the help of friends who made a donation as her birthday gift. Emily’s goal was to raise $20 and generous donations have helped her exceed that goal. She raised $50! I am working toward the suggested goal of raising $350. I’m not there yet since the kids shortchanged me by taking money from those who would have donated to me. Must be that cuteness of theirs. Norm joined in late and has a goal of $100. If you are able, please consider helping us raise the remaining $295 in our fight against brain tumor. Yes, even $1 can make a difference! You can donate on the TEAM ANDY page.

Emily’s reaction when she heard she got more than her goal.

I’ve been gearing up for the walk by wearing my shirt from last year’s walk and doing practice walks with the girls. 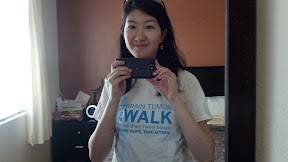