Another year, another 2 shoeboxes.

This year we were more intentional about putting together our shoeboxes. Instead of buying a bunch of stuff to pack (which actually ends up costing quite a bit), we saved up items throughout the year to put in them. This made it a little more “real” for the girls in their giving. Every time we went to a birthday party, we would come home with a bag-ful of goodies that would be played with a few times and then end up on our floor as a tripping hazard. So this year, whenever we got home from a party, we would have the girls choose a few things that they would want to keep for themselves, and then a few things that they would like to share with a child who wouldn’t have a Christmas without Operation Christmas Child. There are a few things that we have received as gifts this year that we don’t have use for. It’s not that we don’t like what you gave us, but we might have doubles or triples of them (erasers anyone?), and felt that someone else would love it more than we would.

We did end up buying a few things like toothbrushes and washclothes, etc. And I also ended up stuffing in a few more items after these photos were taking.

Here’s what we put in the boxes. Just 5 things?

No, not just 5 things. :p Here are what were in each of the containers above… 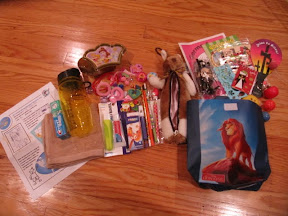 Thanks GY for the heads up on the printables from the OCC website. We got the bottle from a Pump It Up party, and that’s a washcloth and toothpaste. 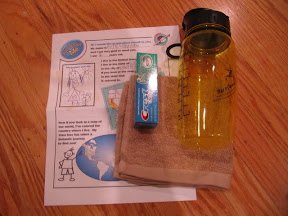 We have soooooooooooo many hair accessories that don’t work well in the girls’ hair (esp Melody’s because it is so silky, so everything slips off), so we packed them up to pass on. 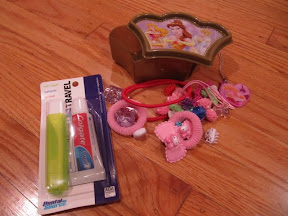 Lots of school supplies (pencils, erasers, crayons, pens…and a yo-yo too) in this pencil pouch. 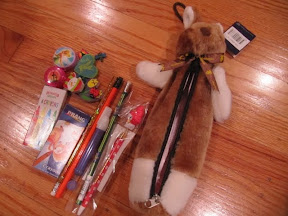 I think we got the Lion King thing from Subway when were were on vacation. There’s a puzzle, notebook, bouncy balls (we have about 10 more left for future boxes), keychains, coloring book, some other little toys, and one of those paddle ball thingies). 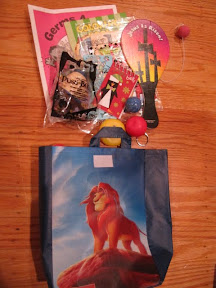 We had one of the boxes already, but the other one was just $1.41 at Target. And we, of course, paid the shipping donation of $7 each box online so that we can track where the shoeboxes end up. (Last year they ended up in Panama!) 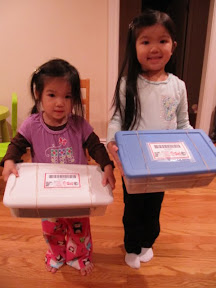 Did you pack a shoebox this year? What did you put in there?