And after the Walk to Cure Psoriasis… (note: some more stories about bathrooms/pottying in this post)

This was probably my 3rd time in the Ferry Building. We were having lunch with Len and Bonnie at Gott’s Roadside. This was our third hour and a half in San Francisco. Luckily, we beat the lunch crowd by a little bit because right after we ordered, the line was super long. Sidenote: While ordering, they gave Melody a pink and purple bracelet with the word ‘GEMMA’ on it. What does that mean? 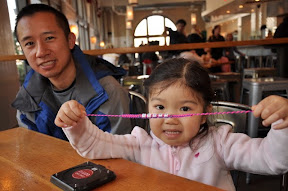 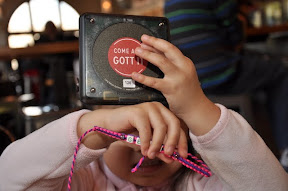 As we were waiting for our orders, Emily said she needed to use the bathroom. I followed the sign. There was a long line…at first I thought it was the line to one of the restaurants, but it was for the bathroom. It went down the little barrier thing and around. I think there were about 15 ahead of us at this point. I asked Emily if she could wait. She said she could. During that time, a mom brought her daughter and said she really had to go. She went on ahead. We moved up a few people and I asked Emily again. She was okay at first but then she said, “Go. Now.” I felt bad cutting because the other lady just did, and it would seem like I was doing it because she just did. Anyhow, Emily really had to go, so I went ahead and asked. Someone at the front said, “Kids get the first priority.” Whew! Right as I walked in, a stall was free. I took her in, and she went.

So anyhow…the food arrived when Emily and I were out. Here are some photos. And you can read Norm’s review of Gott’s HERE. 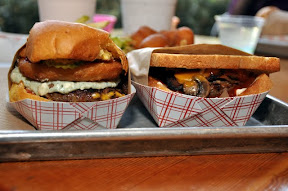 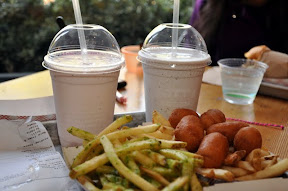 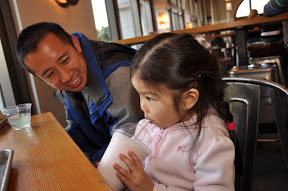 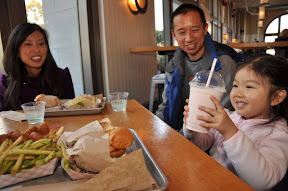 We finished up at around 12:45pm. I can’t believe I usually never eat burgers, and this was my 2nd one of the month! I ate one the week before. We did have a nice 0.68-mile walk back to the car though. 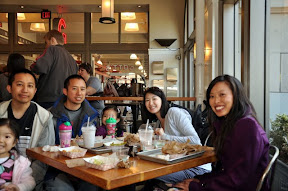 Then, we were off to Norm’s parents’ house so the girls could take their naps…

We got there, and the girls played a little bit. Melody wanted to sleep in her old room. =p She fell asleep right away. Emily, not so much, but she did nap. They woke up around 3:30 and 4pm and had snack. Now we had been in SF for 6+ hours. Off to our next adventure, trying on FLOWERGIRL DRESSES! I blog about that already, so click on that link to read about it there.